After a great mountain bike through the hills behind our campsite, following dirt roads into the valley and then up and out to Taghazout; it was Friday and therefore market day and we explored the small market of wares comprising everything from scissors and DIY merchandise to Berber and Saharan antique jewellery.  Taghazout has a laid back vibe, full of surfers and lots of coffee shops and cafes to while away the time when the waves aren’t good. 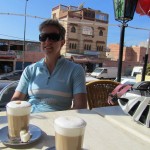 Coffee break after a ride, Taghazout 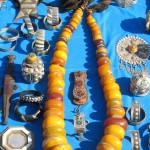 We’ve had some great days on the beach and are even beginning to master standing on the boards in the face of the Atlantic waves!  It’s pretty exhausting though so we took the morning off this morning and drove through to Agadir for market day.  Agadir is not much to write home about, having been destroyed by an earthquake in 1960 and now filled with resort hotels along the long beach, but the market, the Souk el Had, was definitely worth going to, particularly on a Sunday when people come from far and wide to sell their wares.  We ended up with lots of different spices, an amazing array of olives, the sweetest dates we’ve tasted and the local delicacy Amalou – an amazing concoction of honey, almond paste and Argan oil which forms a paste-like dip to have with bread. 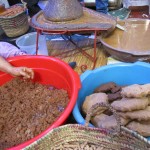 A woman pressing Argan kernels to extract the oil 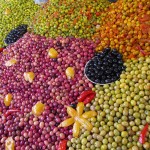 Olives at Souk el Had, Agadir 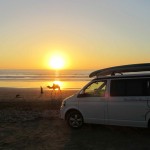 As mentioned, Argan oil is an expensive delicacy, as it is not easily extracted: we’ve been told that it takes the nuts from 30 Argan trees to make just 1 litre of Argan oil (compared with olive oil, where the olives from one tree provide around 5 litres of olive oil) and the kernels of the nuts are then pressed by hand (apparently methods to mechanize the process have been unsuccessful) in a very labour intensive process.

The weather is really warming up and it’s been a beautiful 22 degrees most days (so about 20 degrees warmer than London!) and promises to reach 29 by Tuesday – definitely winter weather we can live with!

Fantastic day today – we were pleased to have made the decision to move on from Imsouane.  Although the site there was fantastic and a short walk down the cliff to the beach, the waves were just too big for us; the “easy wave” beach inaccessible and the wind started to blow furiously (from which there was no escape); so we moved south and are pleased we did so.  We’re now in a site just outside the hippy surf hangout of Taghazout, in a campsite with great facilities and a short walk to a expansive beach with more manageable waves on which to hone our SUP skills.

Started the day with a run on the beach and after chilling went down and played in the waves.  Think we’ll spend some time here – dirt roads to explore on the bikes and plenty of beaches close by. 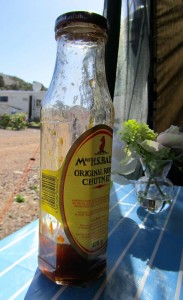 Can’t believe there was room for bunting and fairy lights but no room for further bottles of Mrs Ball’s. 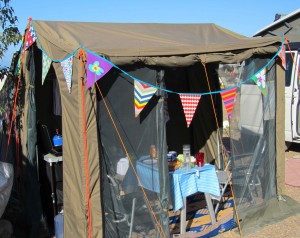 The bunting has made an appearance; Morocco is shocked by the glamping culture!

Awoke to a beautiful calm morning on our last day in Essaouira.  Started the day with a run following the beach passing the ruins of the palace, nearly being swallowed by the sand, said to be the inspiration for Jimi Hendrix’s Castles made of Sand.  Spent the morning exploring the ramparts and soaking up the atmosphere in the souks of Essaouira before packing up camp and taking the tiny winding road to Imsouane.

Hats in the souk, Essaouira medina

Blowing the daily budget … on beads I couldn’t resist!

View towards the harbour from the ramparts, Essaouira

We drove through groves of Argan trees; this is the main area from which the costly oil is produced.  We then veered back towards the coast on a single track road that wound its way down to the Atlantic, providing amazing vistas along the way.

Atlantic vistas on the road to Imsouane

Imsouane campsite is perched on the north side of the village, a short walk down to the beach.  It’s a really small village, with a handful of houses and now some surfer hangouts, but not much in the way of provisions or wi-fi! We spent several days in Imsouane, trying out the SUPs in the waves and exploring the (extremely hilly) coastline by bike.

Cycling through the Argan groves, outside Imsouane

We certainly now understand why Essaouira is called Windy City Africa!  Sheltering in the van from wind and rain; little did we realise how good we had it yesterday!  The rest of the day looks like this (thanks to Matt for setting us up with lots of viewing content!): 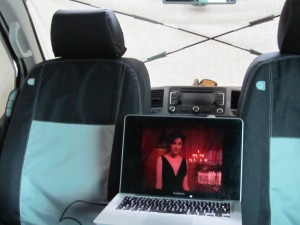 The Essaouira Odeon – sadly popcorn is not provided!