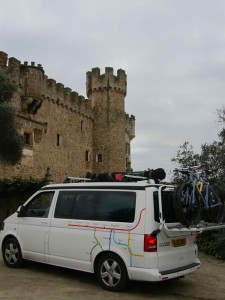 We followed the Roman road, the Ruta de la Plata and crossed Extremadura towards Andalucia – lots of storks, olive trees and wild emptiness.  We stopped to take in Arabic castles, Medieval churches and the sunshine along the way, before finding a campsite in the pine forests, confusingly called Dehesa (Oak pasture) Neuva on the edge of a forest park. 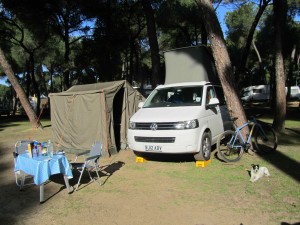 The next day we explored the area on our bikes – taking in a great mountain bike route in the forest and along the orange orchards and then heading into the small town of Aznalcazar in search of coffee and explored the Roman bridge along the way (the promised Botanical Gardens alluded us completely and after clocking up 40 kms on the bikes we decided to give up the search!). 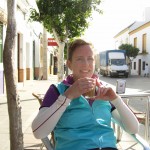 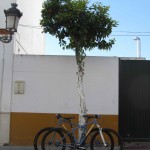 The following day we headed into Seville by local train – what an amazing city: filled with orange trees, magnificent medieval, Moorish and Baroque buildings and lots of hidden squares.  We explored the cathedral, took in the sights over the Alcazar (Seville’s answer to Granada’s Alhambra palace) and got lost in the myriad of small passages of the medieval Jewish  quarter, the Barrio Santa Cruz. 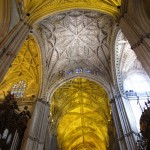 The magnificent ceiling of the Cathedral 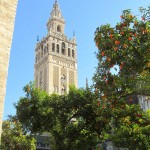 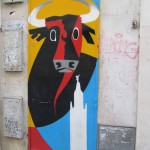 A week into the trip, we decided we really needed to head south in search of the warmer weather we were after!  We headed south, taking in Cadiz and ending up at a campsite on the beach just north of Tarifa, Torre de la Pena.