After an early morning on the stand up paddle boards, we headed out in the car (to rest our legs!) north to the beautiful hilltop white stonewashed village of Vejer de la Frontera – a labyrinth of twisted narrow streets amidst the white houses and churches, perched on a rocky hilltop.  From there we went on to the coast, exploring the hippy hangout of Los Canos de Meca and stopped for a beer at Cabo de Trafalgar, which marks the site of the 1805 battle of Trafalgar.   From there we wound our way along coast through the nearby Atlantic national park and on to the faded Zahara de los Atunes. 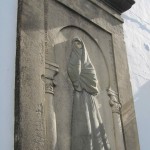 An unusual carving outside a church, Vejer de la Frontera 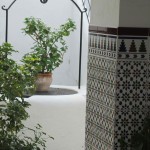