We had a lovely last few days in Cape Town, catching up with a few more friends, exploring the vibey Woodstock area and being hosted to a wonderful dinner by friends of Antonia’s, Andi, who runs Dish (a well known Cape Town catering company) and her husband Oscar, who gives Andi a run for her money on the food front serving his freshly baked bread and pan fried steak; Leigh was thrilled, but I was in my element with Andi’s deep fried courgette flowers and stuffed mushrooms.  We also enjoyed sundowners overlooking the Atlantic with Rosie and Sean and lots of drinks with them and friends in Hout Bay as well as a chilled out day with Andrew exploring the Cape peninsular.

We were pleased to spend an afternoon with Mum and Dad in Constantia before starting the marathon return journey, arriving back in camp 24 hours later.  We were happily reunited with Bambi, still in pride of place in the campsite, and were even happier when we were once again given a sea-view site, just metres away from where we had been before.  It was a bit of a shock to the system leaving Cape Town winter and arriving to 37 degree Spanish heat, but the waves were good and we quickly acclimatized.  The August rush is over but the camp is still buzzing and has a now has a nice laid back feel.

There is a local Basque festival on in Zarautz this weekend and we look forward to soaking up the atmosphere there before heading onwards, probably in to France.

The photos below are a snapshot from our time in South Africa. 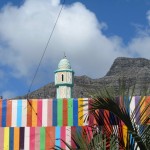 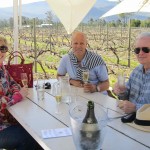 Lunch in the vines at Bramon Wine Estate, with Len and Antonia 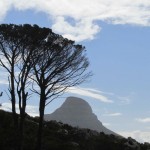 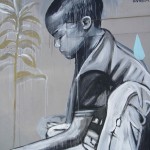 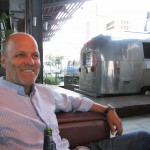 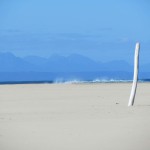 The beach at Plett 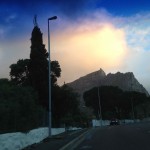 Sunset on the drive up Kloof Nek 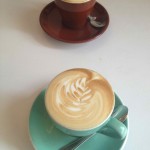