We finally tore ourselves away from our wonderful camp in Zarautz, having accomplished our goal of learning to surf!  We then took the boards to Biarritz and had an amazing time surfing the gentle waves at the famous Cote de Basque beach, flanked by the iconic Villa Belza, built in the late 19th century as a medieval style home and now a fancy hotel.  We were happy to be able to join surfing glitterati surfing here, as Biarritz is where surfing was first brought to Europe, back in 1957, by Hollywood screen writer Peter Viertel, husband of Deborah Kerr, in town for the filming of Hemingway’s The Sun also Rises and who was so impressed by the waves had his surf board sent over from California.  Europe’s first surf club launched soon after and now the whole Basque coastline is famous for its waves.  We completely understand why Biarritz is known today as the California of Europe: it’s chic yet laid back, buzzy yet beautiful and full of sophisticated shops and cafes and, of course, beautiful people! 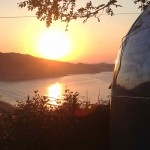 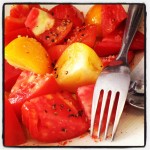 From there we headed south following the Pyrenees, down to the Ariege valley in the Midi-Pyrenees.  Our destination was an airstream and retro camping trailer park, set on a beautiful hillside overlooking forests and meadows, with the Pyrenees glimmering with a smattering of snow in the far distance.  It is an amazing place, run by Perry, an English airstream enthusiast and his French wife Coline.  Ours was the first Bambi they had welcomed for a while (although she had actually visited once before with her previous owners) and Bambi immediately felt completely at home amongst the 15 airstreams Perry and Coline have for hire at the BelRepayre Trailer Park.  From there we explored the delightful medieval villages of Mirepoix and Foix as well as the Cathar fortresses at Foix, Lagarde and Montsegur.  This area, which stretches along the Pyrenean foothills down to the Mediterranean, was a Cathar stronghold in the 12th century and there are castles in varying states of repair on many of the rocky hills.  The Cathars were a fundamentalist sect, who were completely disapproved of by Rome (surprisingly for France, they were vegetarians, but it was their more extreme views such as the rejection of the Old Testament which dismayed the Pope rather than their dietary choices) and eventually there was a large crusade against them, resulting in long sieges at many of the castles and the slaughter of many hundreds of thousands of those faithful to the Cathar teachings. 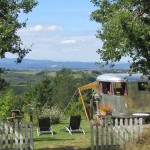 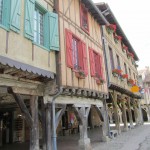 The medieval village of Mirepoix 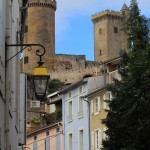 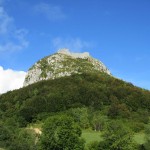 The fortress of Montsegur, perched on a rocky outcrop: the start of a long walk up! 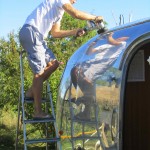 Bambi getting a polish at BelRepayre 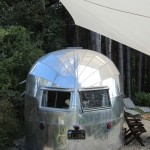 A 1949 Airstream, one of many beauties at BelRepayre Trailer Park

We also took a boat tour of the longest navigable underground river in Europe, underneath Labouiche just outside Foix.  It is 60 metres underground and goes through magnificent caves and chambers full of stalagmites and stalactites.  The water, fed purely from rain, is crystal clear and it was a fascinating experience. 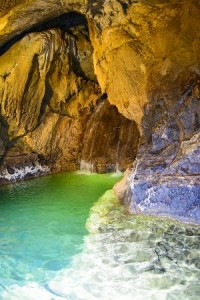 Our highlight, however was neither the underground river tour nor the brisk walk up to the rocky fortress at Montsegur, but the evenings in the Appollo Lounge at the BelRepayre Trailer Park!  The Appollo Lounge is housed in a 32 foot airstream transformed into a bar by a French architect in the 1980s.  Entertained by Perry on the decks and with Coline either behind the bar or cooking up a storm in the kitchen, we got to know the other campers and had several fantastic evenings. 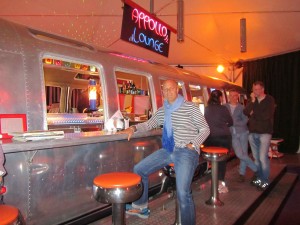 The Appollo Lounge at the Belrepayre Trailer Park