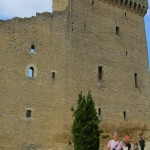 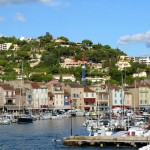 The pretty port of Cassis

We’ve moved on, back to the coast, just east of Marseilles to the pretty port town Cassis, on the edge of Calanques National Park.  The Calanques are something that I’ve been wanting to see for a long time: a spectacular series of white limestone cliffs, into which deep valleys and creeks were formed millions of years ago, filled with crystal clear turquoise water.  They have been compared to the Norwegian fjords (although these were formed by rivers rather than glaciers) and extend east of Marseille for about 20kms to Cassis and beyond.  They are breathtakingly beautiful and we have explored them both on foot (long walks climbing up and down the cliffs, to beautiful small rocky bays) and by boat, taking a commercial boat trip out to see 5 different calanques, each as dramatic as the last. 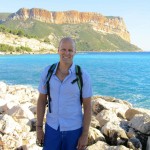 In front of the turquoise sea 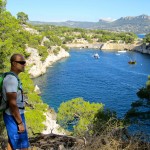 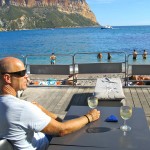 Enjoying the local wine after a long walk to explore the Calanques, at Plage de Bestouan 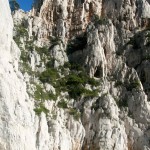 The dramatic limestone cliffs of the Calanques 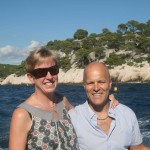 Enjoying the boat trip to explore the Calanques 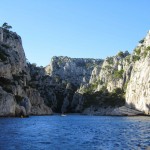 We also did an amazing cycle along the notorious Route des Cretes, with breathtaking views over dramatic coastal cliffs, with the calanques in the distance.  It takes in beautiful Cap Canaille, an enormous red-ochre rock that is the highest sea cliff in France.  The ride up, at various stages an incredible 30% gradient, was tougher than the route up Mont Ventoux, though thankfully it was slightly shorter!  The views were well worth the effort however as were the tiny back roads slightly inland, through fragrant pine trees, rosemary and thyme following stone walled narrow roads.

Sweaty from the severe gradients of the Route des Cretes 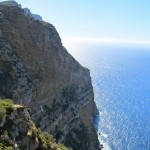 The dramatic sea cliffs along the Route des Cretes 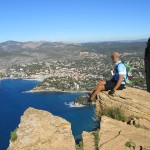 Sitting on top of the world, Cap Canaille

We’ve also enjoyed the local Cassis wine: a crisp, dry rather flinty wine which is not exported outside the immediate area.  The hills of Cassis are filled with beautifully laid out vineyards and the wines are certainly delicious.  Rather confusingly, Kir (wine with blackcurrant Cassis) is not in fact from Cassis at all, but comes from Dijon in Burgundy!