We left Switzerland and the lakes and mountains behind us and travelled on to Strasbourg.  We had spent time in the Alsace region and the Black Forest before, so decided to take a city break here for a change and to get to know Strasbourg itself.  It is a lovely city, the centrepiece being its amazing Gothic cathedral, surrounded by cobbled, twisting narrow alleyways and crooked half-timbered houses, but also housing the glittering glass building of the EU parliament, united by the beautiful canals and rivers flowing through the centre of the city. 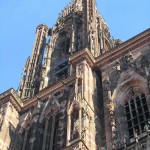 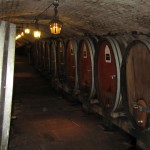 The underground wine cellar at the Strasbourg hospital 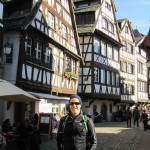 We enjoyed the wonderful collection at the Strasbourg Museum of Modern and Contemporary Art as well as wondering through the narrow alleys of the old quarters and exploring the weekly farmers market.  We also visited the Cave des Hospices de Strasbourg, a beautiful underground wine cellar founded by the local hospital in 1395, back when wine was considered a cure for all ills!  It is of course still operating and we laughed when we saw that the hospital pharmacy was a far more recent addition, dating from the 1800s.  We cycled out along the Canal du Rhone au Rhin, a canalized section of the nearby Rhine (the river forms the border between France and Germany) into the forests which form the starting point of Germany’s Black Forest.  The canal was full of swans and lined by beautiful autumn trees and we were pleased that the sun was shining and it was far warmer than Switzerland had been.

After a few days in Strasbourg we continued on to the Champagne region, visiting wonderful Epernay, the capitale du Champagne and home to some of the larger Champagne houses including Moet et Chandon, Mercier and Perrier Jouet.  There are an incredible 110 kilometers of Champagne cellars beneath the streets and rumoured to be more than 200 million bottles in those cellars!  We tried to put a dent into the 200 million, by doing a “Champagne flight” tasting: delicious. 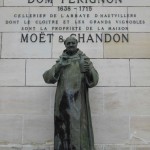 Dom Perignon – the monk who perfected the methode champenoise 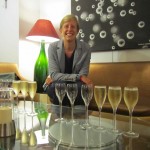 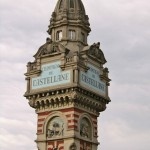 The tower at Champagne de Castellane

We spent two days in Champagne and then journeyed on to Dieppe, passing through some of the battlefields of the Somme and seeing some of the military cemeteries along the way.  We overnighted in Dieppe, a small port enclosed by limestone cliffs (not unlike the white cliffs of Dover) prior to catching the ferry back to Newhaven in the UK.  Although the European adventure is over for now, we know that more adventures await, in the summer in South Africa! 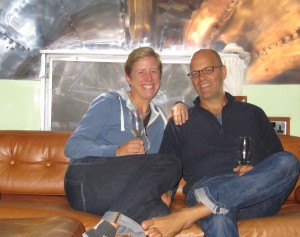 Toasting the end of the road trip: a glass of champagne in Bambi

4 thoughts on “Across France for the journey home”