We spent our last few days in Portugal in the remote Montesinho National Park, in the isolated north eastern corner of Portugal, just near the capital city of Tras os Montes province, Braganca. We explored the castle, medieval citadel and art galleries of Braganca and also drove to explore remote villages in the park itself. Literally “behind the mountains” Tras os Montes is remote and empty, the few villages in the park protected from further development and communities living in them still adhering to communal farming – in one, smack bang on the spanish portuguese border, even the bar was run by the villagers as an association with profits ploughed back into the fields. The villages are virtually unchanged since medieval times, many with barns as the downstairs, filled with chickens and cattle and the living quarters upstairs, but sadly many are crumbling and filled by an ageing population, as the young all leave in search of work elsewhere. 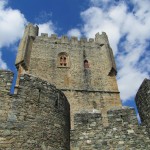 The castle in Braganca 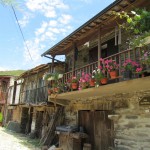 We then crossed over in to Spain and in to the Basque Country, where we met Sharron and Fraser in Zarautz. We’ve had a fantastic week with them, surfing, SUPing, skateboarding and enjoying lots of laughs and good times.
The Internet reception here has been terrible – so that’s to blame for the lack of a blog post last week and the lack of photos. We’ll get some up as soon as we can as well as fill you in on all the details of what we’ve been up to here in Zarautz!

2 thoughts on “Back to Spain”