We moved on to beautiful Provence and have been staying in a gorgeous picture postcard stone village, Eygalieres.  We’ve spent the last week exploring the area, on the bikes and in the car and have completely fallen for it.  Based amongst a chain of white jagged mountains, Les Alpilles, we are surrounded by vineyards, olive trees, lavender fields and good restaurants!  There are beautiful stone wine farms and olive mills everywhere and we’ve loved cycling through the mountains, taking in butterfly filled vineyards and magnificent stone villages. 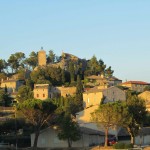 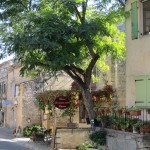 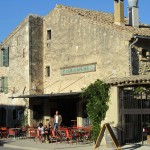 Nearby in neighbouring St-Remy de Provence, is a remarkable Roman town, Glanum, dating from the 3rd century BC, and which includes an amazingly well preserved triumphal arch and mausoleum.  Also close by is Les Baux de Provence, which is perched on incredible limestone spurs, filled with picturesque stone houses, winding cobbled streets and a ruined castle.  We were lucky enough to visit when a festival celebrating the stone carving heritage of the area was taking place, based in a nearby quarry, where the art of stone carving was being kept alive. 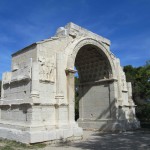 The triumphal arch at Glanum 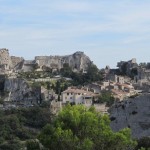 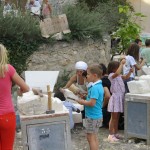 We took a day trip to Aix-en-Provence, one of the hosts of the European Capital of Culture for 2013, and saw a wonderful exhibition celebrating the south of France as an inspiration for painters, from Cezanne to Matisse.  Aix has a delightful feel, with tree filled boulevards, lots of fountains and beautiful squares and buildings.  Another day trip was with the bikes to the Camargue, where we left the car just outside Van Gogh’s Arles and did a long circular route on the bikes, through the marshy Camargue.  To be honest, we were rather disappointed by the Camargue – it was far tamer than we were expecting, with much of it farmed (either as rice paddies or for ranches for the horses and bulls) but we were pleased to see the famed white horses. 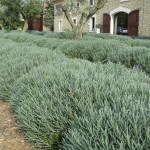 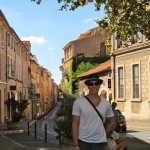 The highlight for Leigh was a day-trip to Sault, set in the heart of lavender country (sadly the lavender was no longer in bloom, but the scent of lavender filled the air and it was quite amazing to see the fields, filled with row upon row of small round lavender bushels), where we parked the car and set off on the 26km climb of Mont Ventoux.  It took us slightly longer than Sky’s Chris Froome to make the ascent (I blame the fact that we had knobbly mountain bike tires on our bikes) but we were happy with our time of 2 hours 15 minutes.  Ventoux, known as le geant de Provence (Provence’s giant) is quite remarkable and looms like a white capped phoenix above northern Provence (the white is from stones rather than snow at this time of year).  We have had glimpses of it on most of our rides, but it was quite strange as at the start of the climb we weren’t actually able to see it, as it was hidden by the pine forests of the lower slopes.  The summit finally appears after about 15kms of cycling and shortly after that the vegetation starts to disappear; the last 7kms are extremely steep and it feels a bit like being in a moonscape, surrounded only by the strange large white stones known as lauzes.  We took a much needed break at the top and then stopped at several places on the descent to take photos, and it still took us less than 40 minutes to get back to Sault (including our photostops!).  We drove back through the beautiful Luberon valley, filled with amazing villages perches (literally perched villages), perched on rocky crags and surrounded by strong rocky walls. 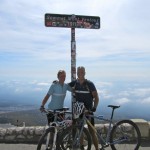 At the summit, Mont Ventoux 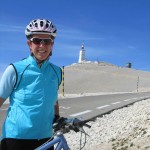 The lauzes on Mont Ventoux 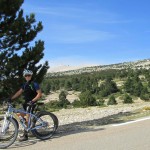 Mont Ventoux: 10kms down, with the summit in the background

Today is market day in Eygalieres, and stall holders have come from all the neighbouring villages, filling the high street with lavender, honeys, olive oils, nougat, flowers and wonderful fruit and veg.  This afternoon we head off for wine tasting at Chateauneuf-du-Pape and will explore the Vaucluse area. 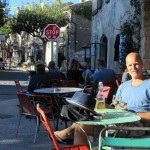 Leigh assuming the position in our favourite cafe, Eygalieres 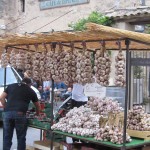