We decided to head south once more in search of late summer sun and based ourselves just outside the picturesque village of Collioure.  Collioure is a magical place, a Catalan harbour nestling under the shadow of the Pyrenees mountains, surrounded by vineyards and made famous by Picasso, Matisse, Derain, Chagall and many others.  Our camp was a short walk away, along a rocky cliff-top path, which took in two gorgeous pebble bays along the way.  We enjoyed running among the vineyards and also did several long sea swims in the crystal clear Mediterranean from the campsite’s private beaches.  Collioure saw the birth of the Fauvism movement, spearheaded by Matisse and Derain, and, as well as having a good Museum of Modern Art, has a myriad of commercial galleries.  We enjoyed walking the cobbled streets and taking in the scenes painted by the above-mentioned artists. 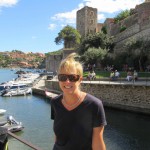 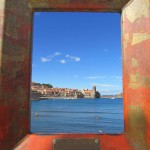 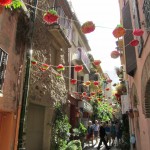 Being less than 30 kms from the Spanish border we also took a day trip along the coast into Spain, turning it into a “Dali day” visiting the beautiful coastal town where Dali spent childhood holidays, Cadaques, as well as nearby Port Lligat, the tiny fishing cove where Dali spent his later life.  Cadaques is unlike any other part of Spain we’ve visited, feeling much wealthier and quite magical, obviously kept wealthy by the floods of French visitors and Dali fans (not forgetting of course that the legend that was El Bulli was not far away just near Roses).  The countryside is quite dry and contrasts quite dramatically with the stunningly blue Mediterranean: the starker scenery must have provided some of the inspiration for Dali’s surrealist work.   After exploring the pedestrian only winding backstreets of Cadaques we headed inland to Figueres, where Dali was born.  Figueres is now the home of the rather bizarre (or should I say, surreal) Teatre Museu Dali, created by Dali in the ’60s and ’70s as “the largest surrealistic object in the world” out of the remains of the Municipal Theatre, which had been destroyed in the Spanish Civil war.  It traces Dali’s works from his early artistic experimentation (works which we were unaware of, including beautiful impressionist and cubist works) to the weirder later surrealist creations. 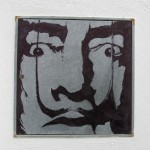 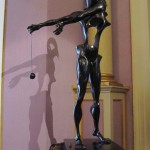 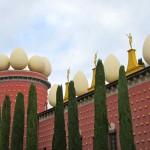 We also took a day trip to Ceret, driving through the beautiful Tech Valley up into the foothills of the Pyrenees.  Ceret is another charming village beloved by artists and the Museum of Contemporary Art here has a superb collection including many works donated directly to the museum by Matisse, Picasso and Chagall. 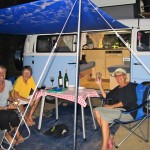 Drinks with 3 lovely ladies: Anne, Valerie and Daisy the VW! 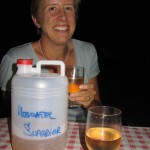 What we have to resort to when the budget is under pressure!

3 thoughts on “France – the Cote Vermeille (or Vermillion Coast, otherwise known as Catalonia)”