We headed on from the Cote d’Azur, driving through magnificent mountains with villages tucked in all the nooks and crannies of the mountains and crossed over into Italy.  It is amazing how the architecture always reveals a change in country; even though there are now no real borders to cross!  Italian villages also lay higgedly piggedly in the mountain folds, but were brightly coloured and have a completely different feel to France.

First stop was Genoa, where we stocked up on magnificent pesto, and spent a long afternoon at the port and with shipping agents to see if it would be possible to ship Cali and Bambi from Italy (allowing us time to head south and soak up more Italian sunshine, avoiding the cold of northern Europe).  Unfortunately the cost of transporting them was prohibitive (and thanks to Rosie for all her efforts looking into shipment too!) so we will get to see some of northern Europe after all.  We stayed on the beach just outside Genoa and were amazed by the black sand and pebble beaches there.

From there we headed up to the Lombard lakes, staying on the banks of Lake Iseo, the smallest of Lombardy’s four major lakes.  It is not quite as glamourous as Lakes Garda and Como, which makes it all the more magical: completely surrounded by mountains covered in dense forest, it has only 3 major towns, all with lovely medieval centres.  There is a lake road which follows the shoreline and is very dramatic along the northern edge. 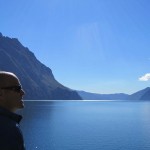 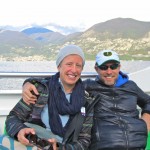 Catching the traghetto to Monte Isola with Gaudy 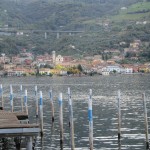 View to the mainland from Monte Isola

We were thrilled that Gaudy, having recently acquired a British passport which allows him the freedom of last minute European travel, decided to fly out to Milan to join us for the weekend.  We had a wonderful weekend with him in Iseo (despite the cold front that had just hit northern Italy and much of northern Europe):  a boat trip out to Monte Isola in the lake, Europe’s largest inhabited island, with a brisk walk to the chapel at the top of the island’s 600m peak; Italian beers in the sunshine; delicious thin crust pizzas; a run to the top of the mountain behind the campsite; and lots of laughter and catching up.  We also drove the beautiful Franciacorta wine route with him, but unfortunately all the wine farms and enotecas were closed on Sundays. 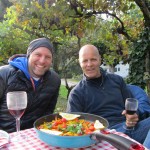 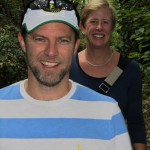 The walk to the peak of Monte Isola 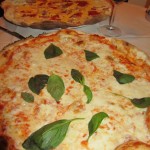 We were sad to say goodbye to him, but know that our homeward journey means that we’ll catch up with him soon again in London, before flying to South Africa for the last two months of the year.