We enjoyed the next few days in Marrakech, relaxing at the campsite pool, exploring the wider area on the bikes and braving the madness of the souks and old medina again.  We then set off for the north, travelling up into the Rif mountains.  It was like travelling to a different country – the desert like surrounds we were used to were replaced by rolling lush green hills, cows grazing in plantations of cork trees and fields and fields of wild orange and yellow daisies.  We’re currently staying in Chefchaouen, a town nestled in the folds of the Rif mountains, filled with brightly painted houses, whitewashed in varying shades of blue and surrounded by golden stone walls.  It has a completely different feel to anywhere else we’ve visited in Morocco; partly because the architecture is reminiscent of Andalucia, as it was built by Jewish and Muslim refugees from Granada in the 1400s and also because it remained fiercely independent until the early 1920s and in fact just 3 “Westerners” had managed to visit the town before 1920 (Christians were forbidden entry by the xenophobic Riffian Berber tribes), the earliest two of whom were poisoned by the townsfolk!  Luckily the town is far more welcoming to visitors nowadays and in fact is a laid back and delightful place. 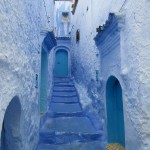 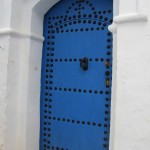 We fell in love with the many blue doors of Chefchaouen 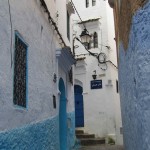 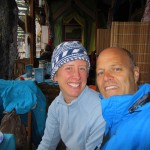 Sheltering from the rain, Chefchaouen 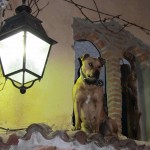 The coolest dog in Chefchaouen 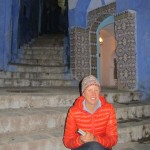 We also realised that one of the reasons that the surrounding countryside is so green and fertile is because it rains in this part of Morocco – sadly the rains arrived and are due to set in for the week, so we’ve decided to move on and set sail for European shores once more tomorrow.