Typically, the morning I mentioned that we’d had nothing but sunshine and bright blue skies for a month it clouded over.  We were grateful as it ensured that our hike through the canyon was pleasantly cool but the next morning we woke to the patter of rain and a blanket of snow covering the Atlas mountains – I guess it is winter after all!  We decided against cycling the pass through the gorge (as hadn’t brought any winter kit with us) as planned, and instead, once the rain stopped, packed up and headed back south in search of warmer weather.  We drove down south to one of the great Southern Oasis routes, known as the Tata circuit, taking us through vast emptiness and the now familiar stony hammada interspersed with magnificent palmeries and oases.  After an overnight stay in Tata, we carried on west back to the coast, and gradually left the desert behind, greenery provided in the form of cacti and prickly pears. 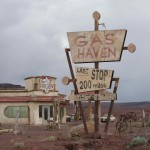 Show your knowledge of trashy films by naming the film this set is from; answers on a postcard 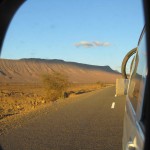 Objects in mirror are closer than they appear … 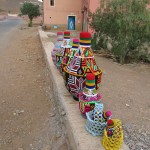 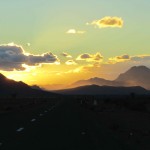 Sunset on the approach to Tata

At last we saw the ocean once again and headed to the art deco town Sidi Ifni.  The town was a Spanish enclave until 1969 and is now a laid back place filled with white and blue fading art deco buildings.  Unfortunately the campsite wasn’t great and the sea rather uninviting with huge crashing waves, so we decided to stay just one night.  We soaked up the atmosphere, enjoying the architecture and the coffee bars. 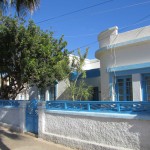 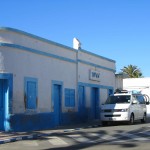 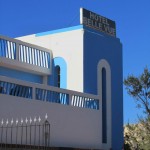 The art deco splendour of the BelleVue hotel

We decided to head on back to the mountains, the Anti Atlas this time, stopping at Legzira beach for a morning walk amongst sea-worn rocky archways and Atlantic sea mist.  The road up in to the Anti Atlas is quite breathtaking; initially quite flat, with the bright green of prickly pears covering rolling hills and then climbing to a steep pass with rocky outcrops and less and less vegetation. 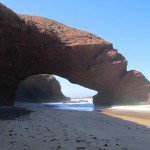 The rock archways at Legzira beach 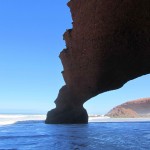 One of the sea-worn rocky archways at Legzira beach

One thought on “Morocco – On to Sidi Ifni”