We set off from Taliouine rested and scrubbed and took the road east, with the surroundings slowly becoming more and more desolate.  The mountains were initially of stony rock and then gave way to sandy nothingness interspersed with the occasional oasis.

The bleak road from Taliouine to Agdz

It made the descent into the Draa valley all the more rewarding, as finally we encountered palmeries and blossoming almond trees in the fertile river valley.  We stayed a couple of nights in Agdz (pronounced Ag-dez) where we explored the palmeries and neighbouring villages on our bikes. 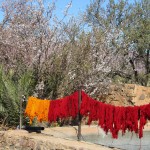 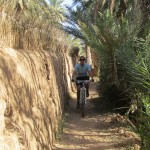 The highlight in Agdz was the neighbouring settlement of Tamnougalt, across the wide Draa river, and once the capital of the region.  It is topped by a ruined Kasbah on the hillside and the village itself, once an assembly of families administering what was regarded as an independent republic, is a wild maze of mud walled buildings, interwoven with dark, enclosed passageways and virtually unchanged in centuries.  We were guided around the kasbah here (in this case Kasbah meaning walled residential quarter rather than a palace) which is still lived in and we were glad of the guide as would have still been trying to find our way out!! 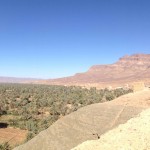 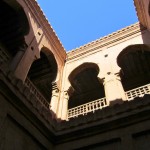 Internal courtyard in the Kasbah at Tamnougalt

From Agdz we took the road out of the valley and headed towards the Sahara.  It was pretty bleak going, particularly where the road passed a cobalt mine, meaning the heavy mine trucks had virtually destroyed anything resembling tarmac.  Our efforts were rewarded by the magnificent Erg Chebbi dunes, rising out of the black stony desert (known as the hammada).  The Erg Chebbi dunes are giant sand dunes lining the Algerian border; they are the best of the dunes Morocco has to offer, and certainly worth the trip east.  We’ve spent a few days here, admiring the dunes as they change from orange, to pink to white throughout the day as the sun rises, and hiking up to the top of the tallest one for amazing sunset views. 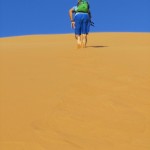 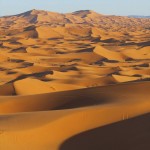 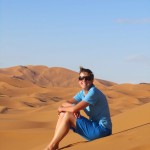 Taking a well needed rest while climbing the dunes 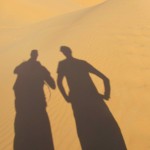 Leigh trying to get creative …

5 thoughts on “Morocco – The Draa Valley to the Sahara”