We spent the next morning visiting the tanneries of Taroudant – according to the guide book, much cleaner and tidier than the famous tanneries at Fez, but a complete assault on the senses!  The tanneries are outside the beautiful town walls on account of their smell – not only rotting meat, but the leather is cured in cattle urine and pigeon droppings!  Luckily I commented on the fact that I was battling with the smell and we were presented with some fresh basil leaves to hold to our noses!  Not a pleasant experience, with dogs and cats eating up the remaining meat from carcasses and various animal body parts lying about the place.  Needless to say we declined to visit the slaughterhouse over the road. 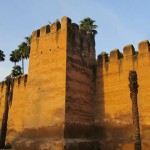 The magnificent town walls of Taroudant, 5kms in total 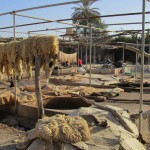 The tanneries at Taroudant – doesn’t quite capture how awful they were! 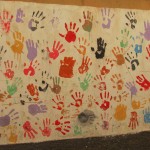 Graffiti we liked in Taroudant 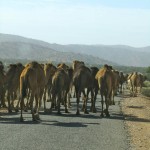 After stopping at, what we realised afterwards was, a ladies patisserie and coffee shop (it’s men only at the outside seats of all the pavement cafes) which caused great hilarity amongst the owner and all her friends, for some coffee and pastries to reignite the senses, we got on the road to Taliouine.  We stopped en route to explore a nearby crumbling kasbah (feudal family castle), sadly rather ruined by the new addition of a restaurant aimed at tour groups and added in an awful modern style to the beautiful crumbling exterior.  It was used as the setting for the French film of Ali Babar and the 40 Thieves and luckily we discovered the nearby spring, from which there were magnificent views of the back of it.

Taliouine is the centre of various co-operatives for growing saffron; indeed it is the only place in Morocco where saffron is grown.  Sadly the growing and harvesting seasons are September and October, but we visited the small saffron museum and bought some – it is sold in 1 gram packages and is highly valued not only for colouring and flavouring, but also for its medicinal purposes (thought to cure snake poison to rheumatism!).

We’ve spent the 2 days here in Taliouine exploring the neighbouring kasbahs by bike.  Taliouine is nestled in the foothills of the Atlas mountains on the Draa river, which is beautifully fertile and the floodplains are filled with cherry orchards, olive groves and beautifully terraced fields where the saffron flowers are grown.  The neighbouring kasbahs are in varying states of repair and it was fantastic exploring each and getting shown around by the local villagers, who are very proud of the kasbahs and enjoy practising their French and even, in some cases, English.  The shout goes up as soon as we are spotted and kids come running from all directions, often on their own bikes and we then have company for a few kilometers, usually racing us and showing off their skills, before they wish us “au revoir” and return to their village. 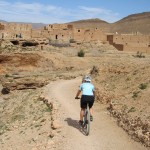 Typical village in the Taliouine valley 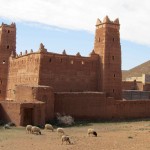 The most magnificent of the Kasbahs in the Taliouine valley 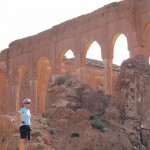 Exploring one of the neighbouring ruined Kasbahs, near Taliouine 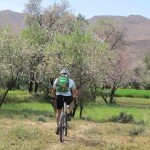 Riding through the cherry orchards in the fertile river valley, Taliouine 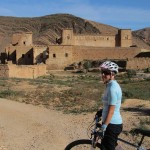 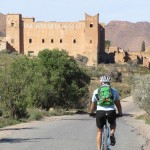 Crumbling Kasbah, built by the Glaoui family (local clan who controlled the Atlas pass in the late 1800s)

The campsite is in a great setting adjacent to the river bed, with lots of cherry trees and dramatic sunsets over the mountains, with atmosphere created by the competing calls from two different muezzins (the singer calling prayer in a mosque) on either side of the valley.  We rewarded ourselves today with a scrub and massage in the hamamm here, heated much the same way as the Roman baths, with a big fire outside to heat the tiled floor.  It was rather frightening at how much dirt was scrubbed off Leigh, and Atmad took pleasure in showing me just how much Leigh was in need of the scrub! 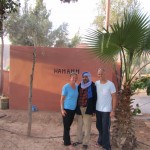 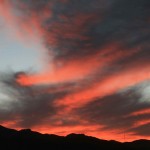 Dramatic sunsets at the Taliouine camp 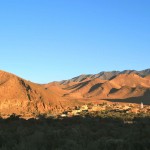 View from camp at Taliouine

6 thoughts on “Morocco – the foothills of the Atlas mountains”