Another week has flown by and we can’t quite believe we’re nearly 5 months in to the trip.  We’re now in Alvor, further west along the Algarve coast and the least built up section of this rather touristy part of the Algarve.  Alvor is lovely: a small fishing village on the Rio Alvor with a large estuary that is now a nature park.  It is a short walk along a boardwalk to the sea and the neighbouring beaches are magnificent: clear waters, red cliffs and sea stacks, and seaside villages with cobbled streets rising steeply from sandy beaches. 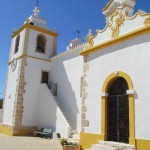 The church in Alvor 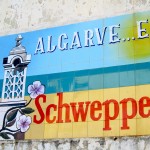 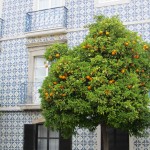 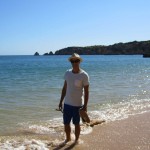 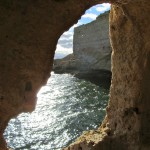 Caves in the sea cliffs at Algar Seco 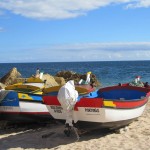 These are by far the most magnificent beaches we’ve seen so far and the waters here are calm, so we’ve been out SUP-ing early morning, exploring sea caves and navigating archways between sea stacks. 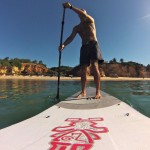 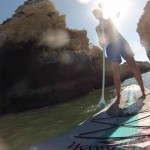 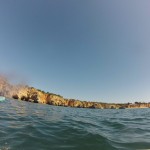 Heading towards Praia da Rocha on the SUPs 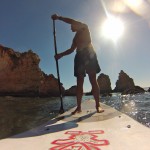 SUPing amongst the sea stacks 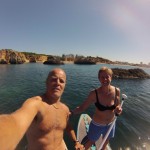 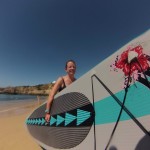 What a fabulous way to spend a morning

We’ve cycled more of the Ecovia cycle route, in both directions from Alvor, and yesterday went just about all the way to the most southerly tip of Portugal: somewhere where we’ll return after our trip up to Lisbon (Brenda and Sharron & Fraser fly in to meet us in Lisbon next week).  The coast towards Cabo de Sao Vicente gets far more ragged, with sharp cliffs and crashing waves. 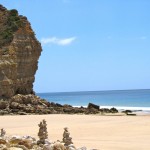 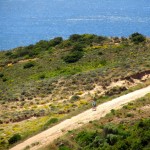 Lisky on the downhill, ignoring the fact I wanted to stop for photos … 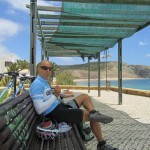 Lisky turning up his nose at the quinoa salad …

We’ve also explored some of the wine farms of the Algarve and stopped for chicken piri-piri in Guia, reputed to be the best chicken piri piri in the Algarve.  The Aquaforno has been put to good use, as we have been practising our bread baking, making beer bread and yoghurt bread, as well as plenty of oven roasted tomatoes to have with salad. 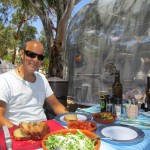 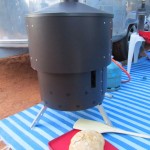 Beer bread made in the Aquaforno 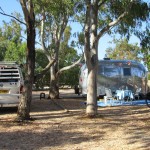 Camping under the bluegums, Alvor campsite 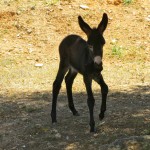 Great excitement: a baby donkey was born in the campsite

5 thoughts on “Portugal – Alvor in the Algarve”