Another week has gone by and we seem to have packed in a whole heap, having headed back to the coast to cool down!  Our first coastal stop was the surfing mecca Ericeira, home to several world qualifying series surf beaches and part of the World Surf Reserve.  It is a wonderful town, with a completely different feel to anywhere else we’d visited in Portugal so far.  We arrived the weekend when the Portuguese Surf Film Festival was being held and, as two of the films in the programme were South African, once the organisers found out we were South Africans we were included as virtual VIP guests, as we were the only South Africans in town.  Among the films we watched was the Festival winner, a wonderful Norwegian film North of the Sun, a beautifully filmed documentary about two film school graduates who went to live on a beach in the Arctic circle to surf for 6 months over winter; it was quite magical.  We were pleased that one of the South African films, Kushaya Igagasi, a short film documentary about a surf hostel and school set up in Durban to get street kids off the streets was also an award winner. 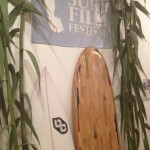 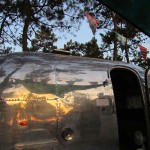 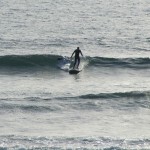 Ericeira itself is a lovely town, nestled on sandstone cliffs above some wonderful beaches and filled with whitewashed houses trimmed in blue.  It was certainly the most “happening” place we’ve been in for a while, packed with local weekenders, surfers and with a real party atmosphere.  We did laugh when chatting to one of the Australian film makers we met at the Film Festival, who, just after Leigh and I had been chatting about how lively Ericeira was, told us that he was taken aback by how sleepy it was!  He had just arrived from San Sebastian in Spain; it made us realise that our life on the road is certainly a world apart from our busy London lifestyle!  We got out quite a bit on the SUPs, at various beaches around Ericeira, with me enjoying the protected harbour area and Leigh honing his stand up surfing skills at Praia da Ribeira d’Ilhas, a world surf reserve beach.

From Ericeira we did a day trip to nearby Sintra, a weekend getaway destination for moneyed Lisboetas, who have been coming to Sintra to cool off in summer for centuries.  Yet another World Heritage site, it is quite enchanting: nestled in amongst verdant hills, topped by the walls of a ruined Moorish castle and with several fairytale like palaces dotted in amongst lush gardens and with sweeping views down to the sea, the town is a maze of cobbled streets winding past huge fantastical villas, some now ruined, with steep cobbled roads leading up to the various castles, palaces and convents tucked away in the forested hills. 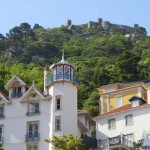 Sintra, nestled in green hills and topped by a ruined Moorish castle 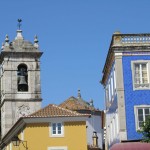 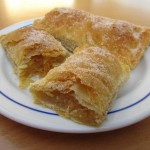 More sweet delights – this time the travesseiro (pillow) filled with almond and egg yolk cream, served at Casa Piriquita since 1952 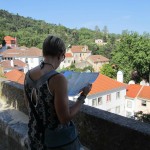 Plotting where to drag Leigh to next, Sintra

We have now headed further north to the more laid back (and definitely sleepy) Foz do Arelho, on a wide lagoon which opens on to a long sandy beach.  We’ve enjoyed SUPing on the lagoon and have explored the neighbouring beaches of surfing hotspot Peniche as well as the wonderfully protected large bay at nearby Sao Martinho do Porto.  From here we’ve visited another Medieval gem, Obidos; more touristy than most of the other Medieval towns we’ve visited (no doubt due to its proximity to Lisbon), it is absolutely gorgeous: still completely surrounded by castellated walls which you’re able to walk around, it is a tumble of cobbled streets, whitewashed tile roofed cottages decorated in yellows and blues, high walled gardens covered by bougainvillea, wisteria and honeysuckle, beautiful churches and a hilltop castle. 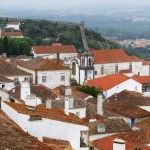 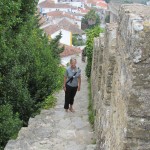 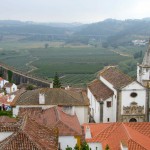 Rooftop views of Obidos from the walls

We continue to be amazed by how much Portugal has to offer: the most varied and beautiful beaches we’ve seen in Europe, plenty of magnificent UNESCO World Heritage sites, dramatic scenery, castles on every hilltop, friendly people and great cakes and pastries!  It’s going to be hard to leave …