Yesterday was another milestone for us – 6 months since we left cold, wet London: we celebrated with a bottle of local bubbles; it certainly doesn’t feel as though we’ve been on the road that long! 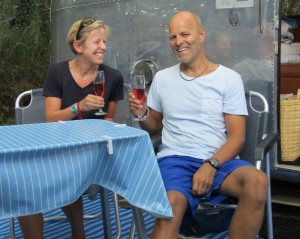 We’ve had a wonderful, relaxing week at Camping Pelinos, in the Seven Hills National Forest 6kms outside Tomar.  Tomar is famous for being the seat of the Knights Templar, the order founded in the 1100s by French crusading knights to protect pilgrims, and which quickly became a symbol of Portugal.  The Order played a key role in Portugal’s history and became extremely wealthy thanks to, essentially, protection payments they received.  When the French king (Philip IV) began persecuting the Templar Knights, the King of Portugal played ball by dissolving the Templar Order in 1314, but soon reestablished it as the Order of Christ, which was instrumental in funding the Discoveries; in fact Prince Henry, who we first encountered in the Algarve, was Grand Master of the Order for nearly 40 years.

The amazing Convento de Cristo in Tomar was the headquarters of the Order and is perched on a hilltop overlooking the town.  It comprises a huge monastery, church and a castle and is an amazing mixture of styles, as it was added to and changed over the period from the 1200s to the 1500s.  We spent a (strangely enough rather cool) morning exploring it: it is everything you would expect with a fairytale like castle, surrounded by thick walls and with beautiful gardens and centered around the 16 sided church.  There are numerous cloisters, a huge, beautifully tiled wing containing dormitories and beautiful views over Tomar and the surrounding hills. 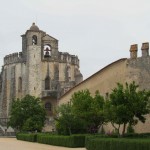 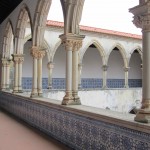 One of the many cloisters, Convento de Cristo 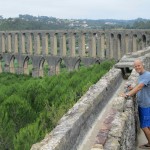 The aqueduct crossing the Pegoes valley

The Convento de Cristo was served by a large aqueduct, which was built in the 1500s.  It is at its most impressive about 2kms away from the Convento, where it spans the Pegoes valley in double decker arches, which you are able to walk along for about 1km, where it rises high above the valley.  We are frequently amazed by the town walls, castle fortifications and aqueducts such as this, where you are able to clamber and explore with not even a warning sign or safety rope – Portugal certainly does not share the UK’s views of strict health and safety practices!

We’ve also spent time at the nearby lake – a huge, manmade lake, the Castelo do Bode, which is the source of the main water supply to Lisbon, set in the forested hills of the Seven Hills National Forest.  It’s been the perfect anti-dote to the heat and we’ve had fun doing long swims and SUPing. 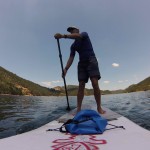 A day out SUPing 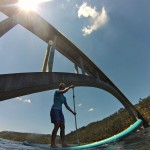 SUPing under the road bridge, near Castanheira 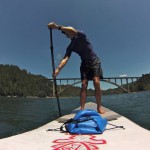 SUPing on the Castelo do Bode lake 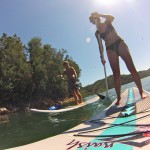 Investigating the many inlets of the Castelo do Bode lake

4 thoughts on “Portugal – Tomar and the Knights Templar”