We’ve been having a lovely time in South Africa, initially being spoilt by winter sun but now being subjected to the winter rains for which Cape Town is renowned.  After our marathon 24 hour journey from Zarautz, via Bilbao, Madrid and London Heathrow it’s been wonderful to relax, catch up with friends and wander around the Cape Town city bowl soaking up the atmosphere.  We are pleased to see that the Cape Town coffee scene is flourishing so we’ve been sampling most of the new coffee places and we’ve also been wine tasting in Constantia, Leigh got his fix of Portuguese steak at the Chapman’s Peak Hotel and we’ve enjoyed the Open Design Festival currently on in Cape Town as well as catching up with friends over dinner. 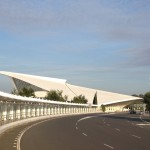 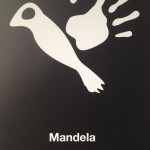 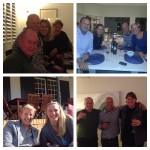 Catching up with Steve, Antonia, Jeremy, Philip, Megan and Rosie in Cape Town

We spent a long weekend away with friends between Knysna and Plettenberg Bay, on David Matthews’ beautiful smallholding Bosky Holt (where we had spent the first few nights of our honeymoon).  It brought back lots of memories and we spent days exploring the beaches at Plettenberg Bay, Keurbooms and Buffalo Bay and as well as a lot of time simply taking in the magnificent views from the farm.  Coincidentally Brenda was in Knysna for the weekend with Carol-Anne and David opened his house to them as well and we had lovely meals and all enjoyed relaxed evenings catching up around the fire. 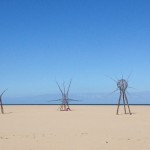 Sculptures on the beach, Plettenberg Bay 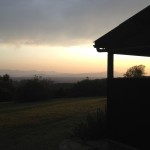 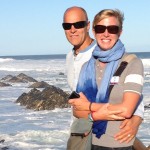 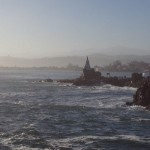 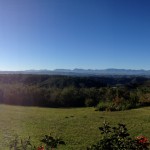 A big thank you to everyone for being so hospitable and generous … and apologies to all of those we don’t manage to see this visit.

2 thoughts on “Sojourn in South Africa”