The week has flown by, spent exploring the local villages on the bikes, running through the pine forests from castle to castle and – a real highlight – having a dinner of rustic Catalan fare with an ex-Taylor Wessing colleague, Sarah Walshaw, and her husband Jose at their home in nearby Creixell, with produce from the nearby family farm.  The starters included pan con tomate, a simple Spanish dish we both love, was served in typical Catalan style, with tomatoes that had been stored from the previous season, halved and simply smeared across the garlic coated toast and finished off with first press olive oil. The main course was a wonderfully simple rustic dish of artichokes, baby tomatoes and olive oil – delicious! 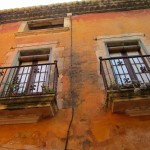 The fading glory of Altafulla, a magical village 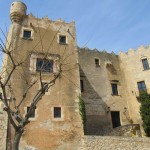 We were also lucky enough to be here for the beginning of the Castelleres season – a Catalan tradition where neighbouring villages compete to build human towers or “castells”.  The tradition is so important that it’s been designated as among the “masterpieces of humanity” by UNESCO.  We watched the reigning champions, from Vilafranca de Penedes, compete against Altafulla and St Pere i St Pau in the centre of Altafulla.  A castell is built in two phases, first the base is formed using strong men, who both support the upper tiers, sustain the weight of the castle and form a safety net in case of tumbles.  Then the people forming the upper layers climb into place, the music starts (traditional Toc de Castells music, played on the Catalan flute and drums) and the highest layers are built as quickly as possible.  A castell is judged a success once it has been both assembled and disassembled without mishap and there needs to be continuous movement throughout the build.  Additionally, once assembled, the “rider” or “enxaneta” who is the person – usually a young girl – who tops off the castle, has to raise one hand with four fingers out to show that the build is complete.  The atmosphere was incredible and even as a spectator you felt a part of it all, holding your breath as the strong men at the bottom started shaking from the signifcant exertion, cheering successes as towers of up to 7 levels were formed and gasping in terror as one tower collapsed, sending the small girls in the top tier plummeting from the top of a 7 layer castle (only to be caught by those at the bottom).  This was certainly one of our top experiences of the trip so far, and should be something added to the lists of things to see before you die! 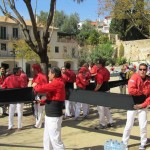 Castellers putting on their sashes, which support their backs and provide valuable hand and footholds, before castle building 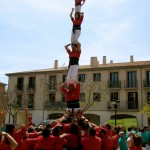 A needle by the Vilafranca Castellers 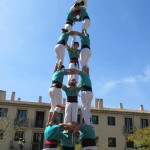 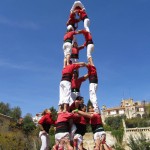 Vilafranca, the reigning champions, building a needle inside the main tower 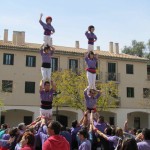 A ‘rising’ tower formation, where each layer was added from the bottom by lifting the castell into the air 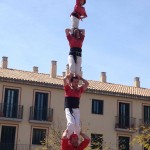 A “pilar de sis” – 1 person per level for 6 levels, by Vilafranca 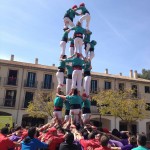 6-level castell nearing completion, by the team from St Pere i St Pau 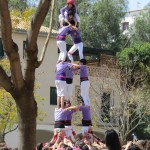 A “torre” from the local team, the Altafulla Castellers 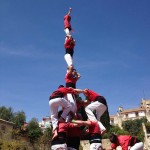 A castle 3-strong is paired down to a single needle