Journeying north once more to Cordoba province, a land of olive groves and ancient architecture, we camped amidst the olive groves just outside Santaella in another friendly campsite (this one providing free breakfast every morning!).  Here we had problems with the towing electrics of Bambi and we were touched by how helpful everyone was.  One evening we had most of the campers in the site gathered around our car, testing various different combinations of towing adaptors and all pulling up their own cars to help us check whether it was a problem with our car or not; we also had local electricians pop past after hours to take a look and a local mechanic clear 2 hours in his day to see us.  Unfortunately it meant that we also got to see the sights of all of Cordoba’s industrial areas – not the highlight of the trip!  We did eventually get the electrics sorted and are really grateful to Rick and Mathilde at Camping La Campina for all their help with translating, phone calls and network of helpful people to ensure we were safely sorted out.  Also thanks to Lolly, who put her English studies to the test while acting as translator for her father the local mechanic and who gave us a guided tour of Santaella while her father was looking at our car. 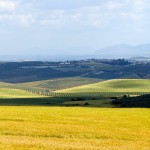 View over the fields from camp to Santaella 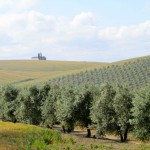 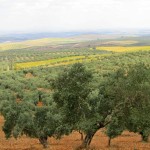 The olive groves next to La Campina campsite

Luckily we did get time to explore the area:  an amazing network of rolling olive groves, vineyards and fields of onions, garlic and wheat.  We spent a day exploring the wineries and bodegas of Montilla and were really lucky that Lagar Blanco (a “lagar” is the name for a wine press, housed in an old building overlooking the vines) stayed open after normal closing time to give us a full tour and tasting.  Montilla is known for its Pedro Ximinez grapes, used to make the dry (but unfortified) Fino, a cousin of the more famous Jerez sherry, for which the Montilla area is famous. The young wines are stored in giant cement containers and then transferred to oak barrels where young and old wines are mixed and fermented into Fino, the nuttier Amontillado, Oloroso and the deliciously sweet and syrupy aged Pedro Ximinez. 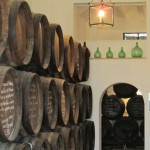 The barrels used to age the wine at Lagar Blanco 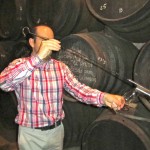 Fino tasting direct from the barrel at Lagar Blanco 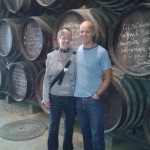 At the end of our tour and tasting, Lagar Blanco

We also visited the Roman city Ecija, now a vibrant white-washed town of winding alleyways and tiled houses.  The Roman mosaics discovered there, displayed in the local history museum, itself housed in a magnificent former palace, are some of the finest in the world.

The highlight of the area, however, is Cordoba.  Although rather tourist infested (this is by far the most touristy town we’ve visited so far, but we did happen upon it during the “Fiesta de los Patios”, when Cordoba’s houses open their flower filled, tiled patios to the public, meaning that it was high season in Cordoba) it is a magical city: founded as a Roman colony in 152 BC, it was then invaded by Muslims in the 700s and by the 900s was the biggest city in the West.  The centrepiece is the Mezquita, a gigantic Mosque complex now containing a cathedral (dating from the 16th century) beautifully decorated and with a wonderful courtyard of orange trees alongside.   We also enjoyed wandering through the narrow streets of the medieval jewish quarter, visiting numerous flower-pot filled colourful patios and soaking up the atmosphere away from the main tourist trail, where Cordoba comes to life as a vibrant student town. 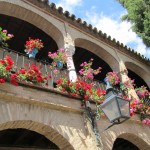 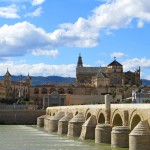 The Cordoba Mezquita and Roman bridge 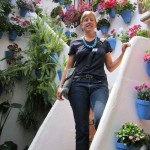 In one of the many flower-filled patio gardens of Cordoba

Additionally, a few kilometers outside of town set on a hillside overlooking Cordoba in the foothills of the Sierra Morena is a 2nd Muslim city, the Medina al-Zahra, constructed in the 900s, designed as a capital to be even more sumptuous than Cordoba.  Unfortunately it was sacked by Berber soldiers shortly after it was built and is now still an archeological excavation site, but the parts that have been excavated and restored to date are magnificent: intricately decorated Arabesqu archways, covered streets and complex living quarters, a palace and stylized formal gardens.  It was also sufficiently off the tourist coach route to mean that we just about had the whole complex to ourselves, which only added to its magic. 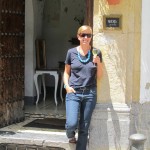 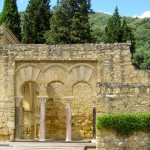 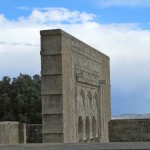 The palace entrance at Medina al-Zahra

One thought on “Spain – Cordoba, Montilla and surrounds”