After a few lovely days in Valencia, the predicted cold front hit us and we decided to move on.  We drove inland to the heart of Murcia province and the unspoilt highlands of the Sierra Espuna natural park.  We left the motorway and drove quiet winding roads which climbed ever higher and higher.  The campsite here is, once again, in the natural park and is small and friendly, nestled on a mountainside just outside the village of El Berro.  The weather forecast was not good so having found out that our friends Annie and Gaudy would be in Madrid for the weekend for Gaudy to run the Madrid Rock’nRoll marathon, we decided to leave Bambi in the camp and drive up to Madrid to join them for the weekend.  We certainly timed our trip north well, as we missed 2 days of solid rain in the Sierra Espuna and Madrid, although freezing cold by marathon day Sunday, was at least dry.

The weekend was great; we hired a tiny studio apartment in the area that is the Dalston of Madrid; described in the Lonely Planet as “quirky, alternative and a melting pot all in one … with a reputation both for antiglamour cool and as a no-go zone, depending on your perspective”.  We loved it!  The streets were lined with small bars, restaurants, galleries and literary cafes and lots of graffiti; with the beautiful buildings (it is also the city’s oldest barrio) in varying states of repair.  We arrived late Friday and immediately explored the neighbourhood, stopping for drinks and tapas in several places.  Having planned things with Annie, we surprised Gaudy the next morning, and spent the day taking in some of the sights of the city, as well as carbo-loading with Gaudy – a particular highlight was tapas that evening at Estada Puro, a tapas bar with a chef trained under Ferran Adria of El Bulli fame.  Our favourite was the 21st century Spanish omelette; real molecular gastronomy, served as an egg foam in a glass with caramelized onion at the bottom, rather than anything resembling a traditional tortilla! 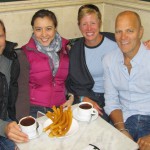 With Annie and Gaudy at the legendary Cafe San Gines, open since 1894 and serving hot chocolate and churros 24/7 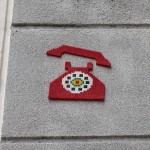 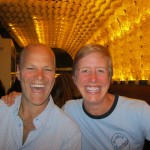 Out for tapas with Gaudy and Annie … and, yes, very happy!

Marathon day was freezing – it was all over the news that the country as a whole was at it’s  coldest; a complete contrast to the warm sunshine of the past weeks.  We spent a busy morning racing the streets and navigating the metro following the race; we managed to see Gaudy 5 times along the way as well as on the finishing stretch.  I think Annie, Leigh and I got nearly as much exercise as Gaudy did!  We had a relaxed afternoon, sampling more of Madrid’s fine cuisine and said our goodbyes at the airport that evening, before getting on the road and heading back through driving rain to our mountain camp, where, thank goodness, the rain had actually stopped. 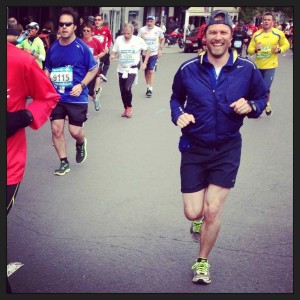 Gaudy’s winning smile – in training for the Comrades

2 thoughts on “Spain – detour to Madrid”