We’ve spent the last few days exploring both the coast and the mountains.  Cycling along the coastal roads (both tar and dirt) has been wonderful and we fully understand why the coast here is known as the Costa del Azahar  or “orange blossom” coast – the coastal plains are filled with orchards and the smell of the blossom is simply wonderful.  There are also fields of artichokes, apricot orchards and the obligatory olive groves, all which make for beautiful riding.  The coast is home to several nature reserves, the Sierra d’Irta (where we are staying) which links Alcossebre to Peniscola, with its cobbled old town nestled on a rocky outcrop into the sea and protected by stone walls and a castle built on Arab foundations by the Knights Templar, and the marshy wetlands of the Prat de Cabanes-Torreblanca. 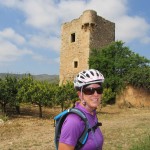 A torre nestled among the orange groves, cycling the Ruta de los Torres on the Orange Blossom Coast 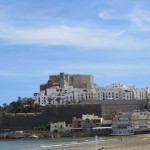 The castle and old town of Peniscola 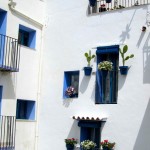 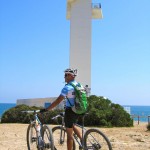 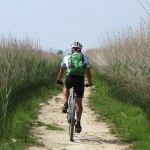 Castellon province, despite being on the coast, is the second most mountainous region of Spain and day trips into the interior have been spectacular; steeply winding mountain passes, hilltop castles, ancient villages nestled sleepily on steep hillsides.  A particular highlight was the whitewashed hillside village of Vilafames.  Rising out of red rock and literally built on and in amongst rocky red outcrops, the village is topped by a ruined castle and is a maze of winding medieval streets and churches.  It is also home to a contemporary art museum, exhibiting mainly local Spanish artists, housed in a fifteenth century former palace, itself an exhibit in its own right, its multiple stories hiding nooks and crannies all used as part of the gallery space.  Another highlight was swimming (well, it was more like wading) in the warm spring waters of the Fuente de los Banos, which are crystal clear and warm at 25 degrees. 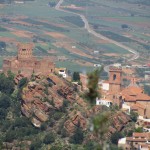 Looking down on the castle and churches of Vilafames 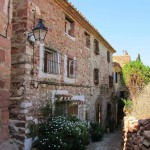 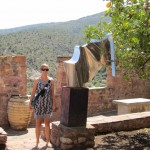 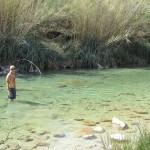