We so enjoyed our time in the Sierra d’Irta and were really sad to say goodbyes to all at Camping Ribamar, including our lovely neighbours, Karl and Marita who sent us on our way with a parting gift of Lindt chocolate, which is made in their home town, Aachen and which did make the onwards journey sweeter!  We spent the last few days there exploring the coast south of Alcossebre, cycling as far as Benicassim among orange orchards and along coastal paths, as well as heading out once again into the mountains.  Another highlight of our time here was breakfasting at Casa Julian in the tiny village of La Barona in the mountains.  Not much to look at from the outside, we entered to find a room full of locals breakfasting; groups large and small, all with large amounts of food and drink (wine, beer, whisky and brandy!) in front of them and in great spirits taking a break from the working day.  We had pan con tomate, there version of which is a huge round of bread which is served with a plate of olives, onion and alioli and we also had a meat and cheese plate; simply wonderful.  We decided to join in the drinking with ice cold beers – we are on “holiday” after all – but didn’t indulge in the brandy coffees everyone was finishing with.  It was a fascinating place, with really good food and, even better, was cheap as chips! 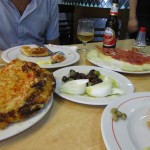 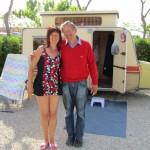 Karl and Marita, our neighbours at Camping Ribamar

We’re now staying in another natural park, the Albufera de Valencia, just outside Valencia city.  The Albufera is mainly marshland with a large lake in the middle, surrounded by rice paddies and is the birthplace of paella.  There is a great network of cyclepaths, which connect the park to the city, and we’ve so enjoyed exploring Valencia by bike.  Valencia is an architect’s dream city: intricately preserved Roman remains including an elaborate baths complex; the Cathedral with its mish-mash of Gothic, Romanesque and Baroque style; wonderful art-nouveau modernista markets and grand houses; the almost space-age splendour of the range of buildings making up the new City of Arts and Sciences complex; a 9km green belt of cycle and running paths, fountains and lawns along the path of a former river; and a myriad of tiny squares among beautiful buildings and cobbled streets in the old town.  It is a vibrant yet laid back city and we’ve soaked up the atmosphere, taken in art galleries, got lost while looking at modernista architecture and, of course, sampled the local delicacies including horchata, a very sweet drink made from tiger nuts into which you dip brioche fingers called fartons. 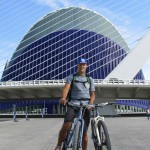 Leigh in front of the Oceanografic, part of Valencia’s City of Arts & Sciences 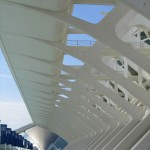 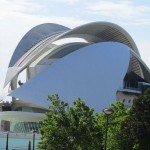 The space-age Hemispheric, part of the City of Arts & Sciences, Valencia 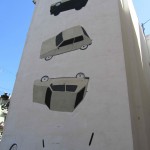 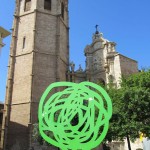 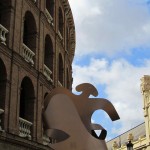 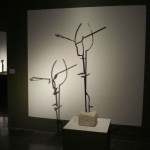 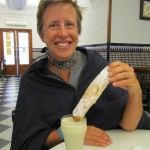 Dipping a farton into horchata at the Horchateria Santa Catalina, Valencia 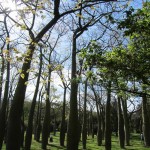 The student vibe of Valencia got to us and we have bought a 44” longboard, the “luxury sedan” of the skateboard world; we plan to skate our way past the mid-life crisis! 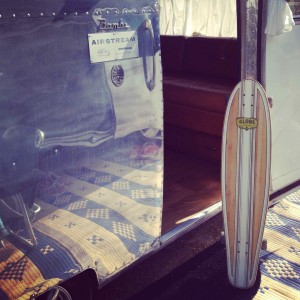 Our new skateboard – a cruising machine!

5 thoughts on “Spain – on to Valencia”