We’re now about 150 kms further south along the coast, in a natural park and marine reserve, the Sierra d’Irta.  We stopped to explore the Ebra Delta, a flat wetland area known for its rice paddies and bird life along the way.  It is obviously still winter here, as the rice paddies were dry and barren and dust storms were caused by farmers ploughing, getting ready for spring planting; we imagine it must look a world apart when green and lush with rice.  There were flamingoes and lots of ducks and coots, as well as sandy roads, kite surfers and whitewashed tiny houses dotted here and there and villages seemingly existing in another world.  We also explored nearby Tortosa, a town first settled more than 2000 years ago and presided over by an ancient castle complex.  The town, like the green Rio Ebro which flows through it, was sleepy, but filled with beautiful architecture and an unusual Gothic cathedral. 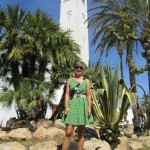 Church in one of the whitewashed villages in the Ebra Delta 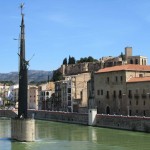 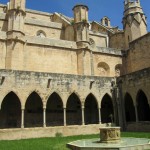 The cloisters of the cathedral in Tortosa 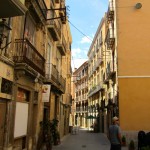 While in the Sierra d’Irta we’ve done a lot of exploring on the mountain bikes and Bambi has become a bit of an attraction in the campsite – she certainly is a good way of meeting people.  The camp is small and friendly and we’ve made friends with a lovely Belgian family Natacha and Pim and their young girls Emily and Hannah.  Following a hard day out on the bikes, where we followed a recommended route which unfortunately took in several hiking trails up three of the mountains (so for us was more of a hike-a-bike than a cycle, and ended up an all day affair), we did a gentle trip into nearby Alcossebre with Natacha, Pim, Emily and Hannah. 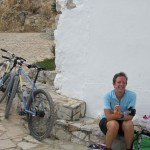 Half way through our a tough day on the bikes and the guys cleaning up at a mountain-top church gave us Fantas – just what we needed! 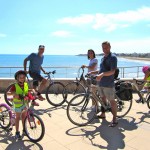 In Alcossebre on the bikes with Natacha, Pim, Emily and Hannah 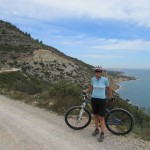 Coastal road from the campsite to Peniscola

We also found out about a local cycling club hosting a mountain bike race, which we did this morning.  Mountain biking in this terrain certainly takes some getting used to, with the terrain mostly covered in huge stones which means a lot of climbing on narrow stoney tracks and loose gravel … not great for the tires!  We were made to feel amazingly welcome and were pleased we didn’t quite come last (that pleasure went to two girls, one of whom turned to Leigh at the start and said, looking at her basic Decathlon own brand mountain bike, “I thought I had the worst bike here until I saw yours” – needless to say Leigh was mortified; but the locals did think he was a bit of a hero to be doing the race on a steel bike with no suspension!).  The feast at the end was certainly worth the effort of the 4hours 15mins, 45kms and multiple punctures! 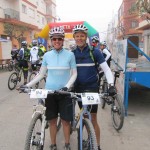 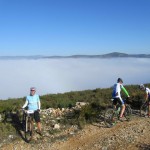 Cycling above the clouds, at the top of the 1st climb 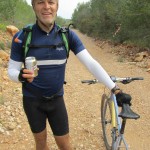 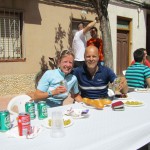 Well earned beers at the end of the race

5 thoughts on “Spain – the Ebra Delta and Castellon province”